What is metaverse? See the trends and how to enter this reality

25 de August de 2022
10 min. de leitura
What is metaverse? See the trends and how to enter this reality 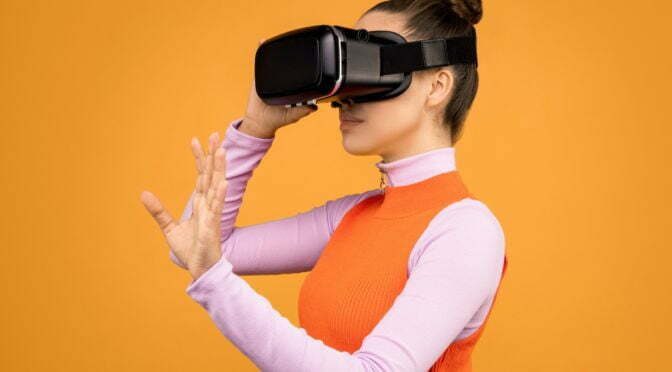 When Mark Zuckerberg shows up, it’s news for sure. After buying several platforms and companies, such as WhatsApp, Snapchat and Instagram, the creator of Facebook announced the Metaverse.

Electronic games, science fiction movies, and series from stream platforms. All these tools once talked about an alternative universe. However, it seems that now the future is getting closer and closer to us.

Completely based on technology, the metaverse was put on the agenda by Zuckerberg in 2021 at the Connect conference – developed by Meta (the successor to Facebook Inc.).

So what is the metaverse and what is this new reality all about? How to enter the metaverse? Is there a way to make money there? Come and see this and much more in this article.

The metaverse is a new reality based on the integration between the real world and the virtual world.

It is a universe where various technologies and innovations, such as 3D and Artificial Intelligence, would be the new “extension” of the internet. It is as if you could set up another life in virtual reality. You know the movies Matrix and Avatar? It’s right there!

Through the use of glasses or any other device that stays in front of your eyes, a new world rises up. In this way it is possible to interact with the environment, new people, and even adopt a new posture. If you have played “The Sims”, you will understand the concept.

Still, the proposal launched by Facebook is very bold. It promises to create new horizons and possibilities. Even though VR (Virtual Reality) glasses have been in circulation for a few years now, the new project goes beyond any known barrier.

In addition, there is the blending with augmented reality.

Without a doubt, many people have been waiting for the Metaverse, they just didn’t know when it would appear. Movies have already shown similar things, such as in TAU or even some episodes of the Black Mirror series. The future has arrived and many people end up not realizing it.

When was metaverse introduced?

Although it was spoken by Mark Zuckerberg in 2021, this term is not recent. The concept was first mentioned in 1992, in the book Snow Crash, by Neal Stephenson.

In the story, the main character is a pizza delivery man in our real world, but in virtual reality he is a samurai. After that, the idealization of a metaverse was addressed other times in literary works.

How does the metaverse work?

Mark Zuckerberg has said that his new project can be seen as a kind of “materialized internet”. Everything you see, hear, or think can be touched, or appear before your eyes.

Instead of viewing the contents, the user can be inside them in a new and very exciting experience.

The idea is that people will be able to use the glasses to superimpose reality. Instead of just reading a news article or talking to a person on a video call, the real and virtual worlds will blend together. The company is even working on new equipment to facilitate digital control.

Still, it is possible that in 5 years the first steps could be taken. Many companies are interested in the new concept, mainly due to the commercial advantages. Epic Games, for example, is betting on this concept by holding virtual concerts.

Insufficient advanced technologies are not the only problem with the Metaverse. There are other issues that still need to be solved over the years. Among them, the main ones are:

Besides all of the above, there are still other open questions. For many years, Facebook itself has faced problems with content moderation. In addition, the constant pressure for regulation of the platform and accountability of users has only grown.

What does Mark Zuckerberg have to do with the Metaverse?

In 2021, Mark Zuckerberg announced that the company Facebook Inc. would become Meta. The justification is that the company was strongly associated with social media. However, the brand’s positioning goes much further, being a technology lab.

From this, Meta would have as one of its missions to connect people – since this is how Facebook started. Thus, Mark announced to take the Metaverse to another level. According to his letter, people will be able to work, study, generate business, and have completely different experiences than we can imagine.

How to enter the Metaverse?

To enter the metaverse you need a good internet, preferably 5G – the better the connection, the better the data used and the reality of your metaverse will be. In addition, you will need some equipment and technologies, such as:

Cryptocurrencies in the metaverse? Blockchain? Yes, these will be your currencies, your money, in this new layer of reality.

That way you will be able to make purchases and move all your life in the metaverse. There is also a tendency to use NFTs (non-fungible tokens).

Which companies are working on Metaverse?

In this article, Epic Games has already been mentioned, mainly for its experience with shows performed by famous people within games. However, there are other companies interested in investing in the project, offering more real experiences for its users. They are:

How to invest in the metaverse?

The easiest way to invest in the metaverse is by trading shares of companies that are or will be connected to this new reality. Meta itself is an example of this, and it is possible to buy its papers through BDRs in Brazil – the shares themselves are only traded in the USA.

Cryptoactive and land in the metaverse

Some technologies that are already common in the financial sector tend to expand into this new layer of reality.

This is the case with cryptocurrencies and blockchain. This is because another way to invest in the metaverse is through crypto-actives that circulate within the technological universe.

MANA and Star Atlas are examples of cryptocurrencies that exist in the metaverse and can be used like our money here in the real world.

Furthermore, experts claim that it will be possible to invest in land that will exist only within the virtual world. Thus, you can profit from renting and selling the properties.

What are the possible impacts of the metaverse?

We expect the metaverse to be a fantastic world, made of incredible new environments, altered reality and perception, and a new impetus for the hyper-connected world, increasing discovery and creativity.

It is sure to bring new opportunities and new ways to interact. We have thought of a few:

Now that you have seen what the metaverse is, how to enter it, and how to invest, let’s follow what the applications and trends are for the new virtual reality.

Artificial intelligence is one of the dominant innovations of the metaverse. AI will be responsible for interactions, machine learning, business, and, believe me, even relationships.

With this, new models and refinements of NPL (Natural Language Processing) tend to emerge.

Another application of AI in the metaverse is the so-called spatial computing layer. From this technology it will be possible to create and edit your entire virtual reality space. That is, you yourself manipulating a new 3D universe to make it even more real.

In this regard, artificial intelligence enables the creation of increasingly immersive, real and responsive environments.

Mark Zuckerberg himself has said that Meta is already working on developing an artificial intelligence that allows the creation of virtual worlds just from a description made by people.

You can, for example, give the command to develop the island from the movie Avatar and the Artificial Intelligence takes care of creating it. From that, you create your interactions and your universe. According to Mark, the prototype of this technology has been called the Builder Bot.

Speaking of AI, it is also already a trend that virtual assistants will become more common with the rise of the metaverse. As this technology advances, having a bot will become even more common.

Chatbots with artificial intelligence can already be used in any type of business, such as stores, social networks, and in any session of your website.

With the new layer of reality, the interaction with these bots will be even more real, adaptable and routine, being able to give voice commands to make a purchase or a conversation within the virtual universe.

According to NVIDIA (multinational leader in AI), virtual assistants will gain new customizations and more intelligence to learn. With this, they will be adapted for each industry sector to evolve the business possibilities of companies. Have you ever thought about creating your personality in a bot?

The learning of these machines will have fewer and fewer limitations, a factor that expands their activities and applications in both business and interpersonal interactions.

The environment is on the agenda in both the real and virtual world. After all, data centers, cloud activities, and IT-related processes are responsible for about 2% of all carbon emissions – almost the same percentage as aviation.

Sustainability in the metaverse can use technology to reduce emissions and avoid waste (and disposal) of waste, for example.

Companies will be able to test products in the virtual world before they are launched, so that they can assess their impacts beforehand.

Other possibilities generated by this reality are:

Concrete sustainability projects in the virtual world are still uncertain, but the technology and the metaverse layer make the future of many projects related to a more sustainable world promising.

To understand what the metaverse is to be facing a reality that is not very distant. After all, the metaverse already exists and is already working. What Mark Zuckerberg is proposing is the advancement and popularization of this reality, which will be considered as the next generation of the internet.

Did you know that chatbots are already widely used even before the metaverse came into the picture? And you can even create one with Weni Plataforma. To understand the applications of a chatbot, check out the article: all about chatbots and what they are for.